-- -- --
We at The Resistance hope more Americans will join us in re-establishing the ideals of our nation's  "Founding" Democrat.

Though Americans seem politically divided of late, we are a lot closer than many realize.  May we gain this closeness in the near future.

To quote Jefferson one last time (a paraphrase from his 1801 inaugural): We are all Democrats. We are all Republicans.*  This "Second American Revolution", the remarkable peaceful transfer of supreme power, was sealed by Jefferson's olive branch of  political healing following a vitriolic campaign.  Prior to 1801, Western rulers changed only through bloodline, coups, or wars.  In 1801 America saw the peaceful transition from Federalists to Republicans in the White House and Congress, but no blood was shed.*

*In fact, the "Revolution of 1800" was sealed with Jefferson's balm to defeated "Federalists".  Federalists held power for the first 12 years of the republic, but were defeated by Jefferson's opposition party, then called the "Republicans".  "We are all Republicans. We are all Federalists" were Jefferson's exact words. Later by 1809, Jefferson's party called itself the "Democrat-Republicans", and by 1828 it called itself the "Democrats".  Federalists were no longer a political force after 1816, when America coalesced in an "Era of Good Feelings".  Federalist tendencies were revived in the 1830s in the form of the "Whig" party.  When the Whigs split over slavery in the 1850s, many members joined the newly created "Republican" party.


"The spirit of resistance to government is so valuable on certain occasions that I wish it to be always kept alive" - Thomas Jefferson, 1787, to Abigail Adams.

Jefferson also wrote in 1787:
"A little rebellion, now and then, is a good thing, and as necessary in the political world as storms in the physical. ... It is a medicine necessary for the sound health of government."

Twenty two years later, late in his presidency, President Thomas Jefferson described America as "trusted with the destinies of this solitary republic of the world, the only monument of human rights, and the sole depository of the sacred fire of freedom and self-government" 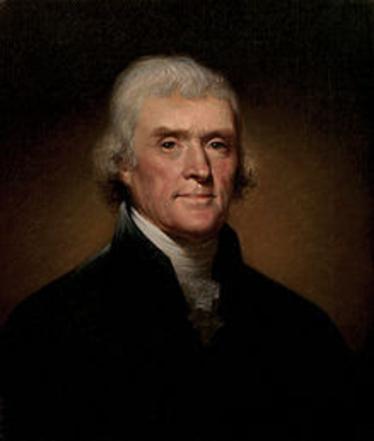